My oh my! What a lovely thing to take a break from the news and come back to find a spike in readers and followers and all around interest. You have my humble thanks, as always. To find value in what I have to say means that I’m making a difference, asking the right questions.

So I want to address why I’ve been mysteriously absent. No one asked me where I was, but I feel like lessons can be gained from a modicum of transparency. Plus, it further illustrates the point that we are all connected in a much larger picture. (I mean, one of my favorite things to look at is the way humanity ebbs and flows. Sometimes I get to see it in my own life, sometimes in others.)

November 28. My university was under a lock-down for a good long while on the 28th because of an attack on students. 11 people were taken to the emergency room for injuries directly related to the attack. The attacker was brought down and ultimately died right outside of the building where I work and have my major classes. I wasn’t on campus that day, but all of the people I care about at the university were and I reached out to each of them to make sure they were okay. They saw the whole thing. And the response teams were cleaning blood off of the sidewalks for two days after the event. That was something I kept looking at, asking the questions that these events often bring to the surface.

The LSAT-Take Two. I was supposed to take the LSAT again on Saturday. In the building right beside mine, where the attacker was shot down. I withdrew my registration and sent explanation emails to the schools I applied to. I also decided I was not going to be retaking the LSAT before applications needed to be in. I accepted that the scores I had were the ones I would be judged on. The schools responded with understanding and well-wishes.

The Meltdown. I am a passionate person. When I am happy, I am happy to the fullest. I am invincible and giddy and on top of the world. When I am sad, there is no one who can lift my spirits. I am morose, I am depressed, I am wading through the depths of hell. And there is nothing to suggest that I would not feel confusion at those same extremes. And that is what happened. I seem to have come to a very rough crossroads. And it all has to do with what kind of person I am.

You see, I spoke with a friend a while ago and I was complaining that I was a “Watson trying to be a Sherlock”. Now, what I meant by this is that I am a supportive figure. I help other people find their passions and direction. But I want more. I want to be in the spotlight. I want to be the one people look up to. I’m tired of being used for what I can offer and having no one (with the exception of my husband) to see how much I care about others. And her reponse (goddess love her) was “There is no shame in being a Watson. Sherlock would be in rehab or dead without his.” I, of course, was not as responsive to this, as I could not reconcile the frustration I was experiencing. But trust and believe, that message came back to me several times over in the coming days.

The Resolution. To say that I struggle with who I am is probably the biggest understatement. Who I am, who I want to be and how to get there are all at odds with each other it would seem. What I think I know is no longer useful, as I am over-analyzing everything-to the point of insanity. The way this break from social media and whatnot turned out is that I don’t know what I’m doing. I don’t know who I am, where my life is taking me. I don’t know.

Because the minute I sit down and think about all the things I think I know, I cut myself off from all of the things I could know but don’t.

So my “resolution” is to experience-not know. Knowledge changes. Every science student knows (ha!) that what is printed in their textbooks is only good and factual for a couple years at most. And then something happens and the information becomes obsolete. So why am I so focused on “knowing”?

I adore the movie “The Bucket List” with Morgan Freeman. And it got me thinking. I have a bucket list (a list of things you want to accomplish before you kick the bucket). Why should I hold off on doing those things until I’m dying? That seems rather dumb to me.

Instead of waiting around for a convenient time to do things, I need to make time. So I will. It starts with graduation. And then, I take on the world. Maybe I’ll do a separate blog for my bucket list-so I can be accountable haha! 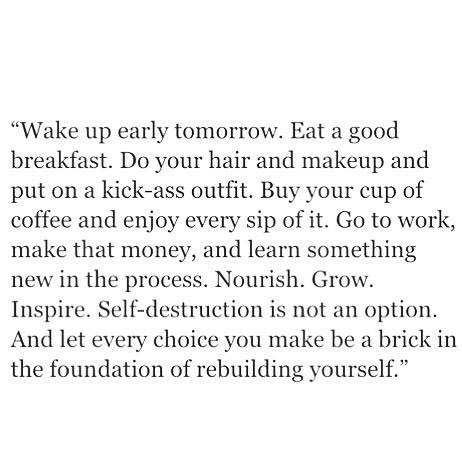